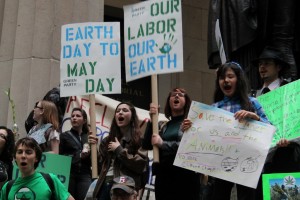 History of the Green Party of Brooklyn

The Green Party of Brooklyn is the Green Party political organization for Kings County in New York City. We run candidates in the borough of Brooklyn, work on local issue campaigns, and represent a progressive challenge to “politics-as-usual.” We are the opposition party in Brooklyn.

What is the Green Party?

The Green Party is a different way of looking at politics. We are committed community activists, good-government proponents, environmentalists, social justice advocates, anti-war organizers, and concerned citizens who see the need to change the corrupt, corporate sponsored two-party political system. We combine issue activism with a principled challenge on Election Day.

We are connected to an international movement based on the Four Pillars – Ecology, Social Justice, Grassroots Democracy, and Non-violence – and to Green groups throughout the United States through the Ten Key Values, while remaining committed to our belief in the power of decentralization at the local level. We have hundreds of Greens elected across the United States, and organized presence in 49 states, as well as Guam and Puerto Rico. We represent the breadth and depth of America and offer a plan of hope instead of fear.

The Green Party – the future of politics in New York City

New York City is known for cut-throat politicking and patronage favoritism that breed corruption. This might make for good movies, but the “business as usual” political reality has forced too many New Yorkers to go without a democratic city government for far too long. Bureaucracy, closed-door negotiations, and the loss of community control have become accepted as the way it has to be.

We believe that, for New York City to thrive in the 21st-century, we need to return to a city of, for, and by the people. We believe in concrete solutions to problems, from electoral reform to small business development, that take their direction by including communities and allowing their voices to guide how resources can be more equitably shared. As the city’s most populated and diverse borough, Brooklyn can lead the way towards a new New York – one where “politics as usual” becomes a thing of the past.

Get The Latest Updates!